Against Damage by Birds and Insects

Against Damage by Birds and Insects
Product Name: Not determined yet

Build R has been researching and developing over the last few years to mitigate the damage to power facilities and agricultural activities caused mainly by crows. Crows hate rays with a certain frequency. It has been discovered that the substance that emits this particular ray can be extracted from the internal organs of a marine organism. With the help of Dr. Sugita, emeritus professor of Utsunomiya University, and Associate Professor Aoyama of the Faculty of Agriculture, Utsunomiya University, we have completed a prototype of this simple and highly durable device coated with this specific substance. As of 2020, we are preparing to proceed with joint research with Shikoku Electric Power Company (YONDEN), a power company who undertakes generation, transmission and distribution of power throughout the entire islands of Shikoku, Japan.

Background:
Some bird types cause problems at various facilities such as power lines, substations, power generation plants, distribution centers, warehouses and environmental sanitation facilities, while simultaneously the birds themselves often suffer harm like electrocution or other accidents. Reducing facility maintenance and management costs to minimize the damage to systems caused by birds has become an important issue for power generation companies as well as power transmission and distribution companies.
Technologies Tested and Developed by Build R:
In order to prevent birds from flocking together on or around any facility and perching of birds on electric cables, in addition to nesting in or around power facilities, Build R ensures that it is effective to make use of discomforts felt by birds in terms of visual or auditory perception. This section introduces various devices and systems that Build R is working on independently, with cooperation of universities, or in joint effort with system engineering companies as well as manufacturers.
Various Devices under Laboratory Testing and Experimental Use:
A. Device that emits invisible light to scare away crows.
A. Small Windmill: The vanes of the small-sized vertical windmill are coated with a special coating agent (developed by use of liquid extracted from a marine organism which is harmful to coral) utilized to scare away crows that do not like the flickering rays. The vanes are coated with our technology, Renewal Clean (RC) coating agent, developed by Build R that is effective to prevent damages to any materials by ultraviolet (UV) ray is also applied to the windmills. The vane’s front side and obverse side are coated by above coating agent respectively. When a bird approaches a place where a windmill is installed and tries to alight at a nearby electric wire etc., it tries to stop on a rotating pipe or a perch that is difficult to alight upon them. Thus the birds learn that they cannot stay on cables and facilities. This method has been proven to be effective in increasing bird cognition in line with Skinnerean and Pavlovian principles. When the cognition of birds increases the birds will not approach to the place where this windmill is installed even the rotating pipes or shaky perch are not installed nearby.
B. Devices that make it difficult for crows and birds to alight upon electric wirelines and related facilities.
B-1. Rotating Plastic Pipes with Protrusion: Two kinds of piping with protrusions also coated with our special coating agent to alter appearance upon rotating, shown beyond the windmill are devices to cover the electric wire for prevention of crows from alighting upon electric wirelines.
B-2. Rubber Perch: “Rubbery” perches made of soft rubber and coated plastic shown in front of the windmill are those that crows, wary of appearance change after rotating, or other large-sized birds find difficulty alighting upon as they sway quite easily. 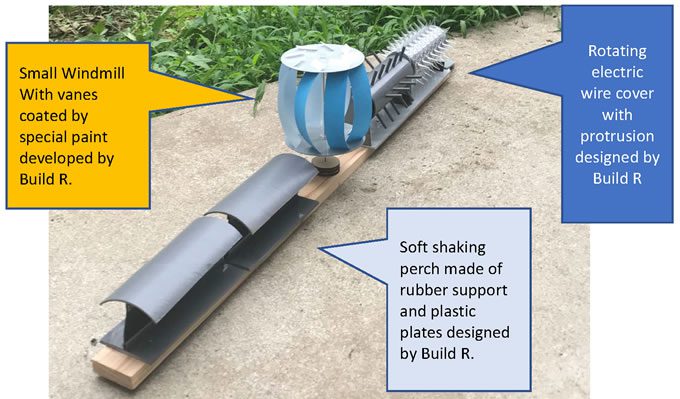 These devices have been under testing at the Laboratory of Functions and Morphology, Department of Agrobiology and Bioresources, Faculty of Agriculture, Utsunomiya University, Ustunomiya City, Tochigi Prefecture, Japan.

Development of Plan-A:  Design Evaluation on Small Windmill or Vanes
The vanes of the small-sized vertical windmill are coated with a special coating agent developed by use of liquid extracted from a marine organism which is harmful to coral. Various design of small windmills have been evaluated as shown in below.

【Summary of Examination】
Several windmill possible to make have been tested. The results of test can be summarized as follows:

➉ rotates easy even in a breeze but reverse rotation starts when the wind stops. Flicker of two colors is weak.
⑪ rotates easy even in a breeze and the best rotation speed among others. Appearance of two colors is most exciting among others as well.
⑫ is the lightest in weight and rotates well. But reverse rotation occurred due to twisting of wire hanging the device. Flickering of color is good.

⑬ rotates well second to ⑫. As it does not use hanging wire no reverse rotation occurs.

【Recommendations】
Due to a friction of rotating shaft, the rotation speed of device having a rotation shaft is lower than that is hanged by wire in the breeze. However, the hanging type is weaker against strong wind. The experiment in the strong wind is to be carried out further.by use of liquid extracted from a marine organism which is harmful to coral.

Development of B:  Specially Designed Plastic Pipes Covering Wires
Plan-B’s concept is to cover the power cable or wire by assembling by-parting pipes made of plastic or to install perches made of rubber where appropriate so as to prevent Crow stopping on cable and other structure in the facility where crows gather. The outline of Plan-A, Plan-B-1, and Plan-B2 are as presented below. 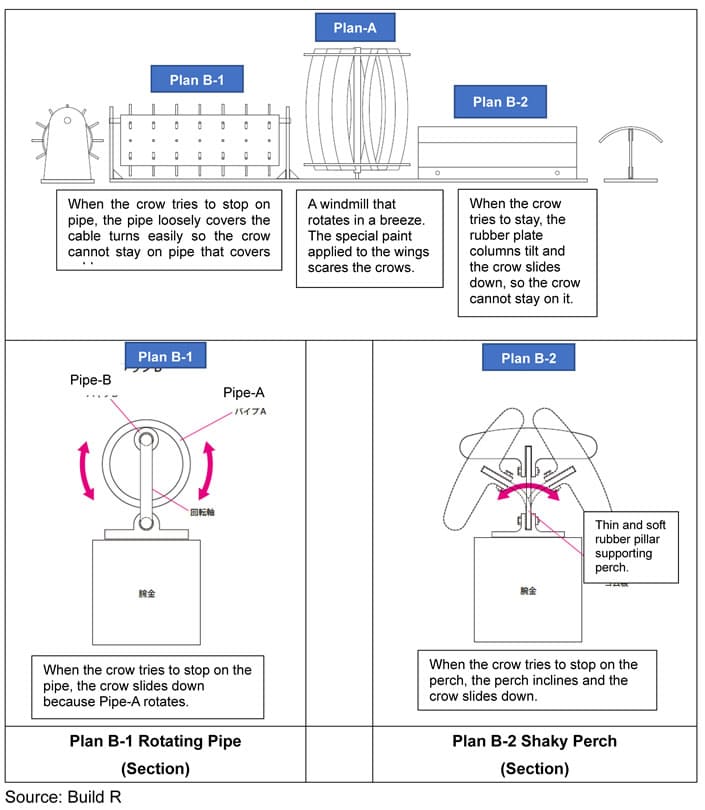 C. Specially Designed LED Lighting Apparatus
It is becoming apparent that crows are vigilant the rays emitted by an LED. We are about to start an experiment to measure the effect of LED-based light emitters on crows. This device is a light-emitting body that uses LEDs, but we believe that it will also exhibit its effect during the day and at long distances. Since the power consumption of LED is extremely low, it is estimated that the operation and maintenance cost of the device can be kept low. It can be recommended to use this device in conjunction of Plan-D (AI Sound System) so that the LED light is emitted for a short period when the number of crows gather to subject location. Below picture shows how the experimental operation of this device is going to take place at laboratory provided in the facility of Faculty of Agriculture, Utsunomiya University in Japan

D. AI sound system composed of cameras, speakers and control hub that drives away crows by use of sound that alerts crows
This system uses Artificial Intelligence (AI) technology to analyze the images captured by multiple cameras. When birds start flocking in a certain number around a specific facility, a sound that makes such birds feel uncomfortable is emitted so the birds are driven away from the facility which always finds itself in trouble because of damage wrought by birds.

E. Application of PicoCELA to wider area covered by AI System
No wireless LAN controller is required. Even under a dynamic and fluctuating radio wave environment, the individual relay nodes will autonomously create an optimal relay network. Cloud management is also possible, so monitoring the status of each node and update your firmware via your PC or smartphone is simple. Unlike conventional mesh networks, the more relay hops, the more throughput advantage is achieved. This makes the realization of a large-scale wireless backhaul network possible.  https://www.picocela.com/en/products-2/

The research and development of above subjects and projects have been conducted in supports and collaboration of following university and institutions.

The Japan Wildlife Research Center (JWRC) was established in 1978 with the aim of studying how to build harmonious relationships between human society and nature from the scientific and policymaking standpoints. As a pioneer in this area of study, the JWRC has been conducting various surveys and researches on terrestrial areas, such as “satochi-satoyama” landscapes created through the sustainable use of natural resources and primeval forests, inland water areas such as lakes, rivers and marshes, and neritic zones such as coral reefs in and outside Japan. JWRC also contribute to human resource development and international cooperation for environmental conservation.
Since Dr. Shouei Sugita is the member of JWRC, the Team would seek the contribution of JWRC especially when an ecological perspective is deemed necessary to conduct a specific study.

This website uses cookies to improve your experience while you navigate through the website. Out of these cookies, the cookies that are categorized as necessary are stored on your browser as they are essential for the working of basic functionalities of the website. We also use third-party cookies that help us analyze and understand how you use this website. These cookies will be stored in your browser only with your consent. You also have the option to opt-out of these cookies. But opting out of some of these cookies may have an effect on your browsing experience.
Necessary Always Enabled
Necessary cookies are absolutely essential for the website to function properly. This category only includes cookies that ensures basic functionalities and security features of the website. These cookies do not store any personal information.
Non-necessary
Any cookies that may not be particularly necessary for the website to function and is used specifically to collect user personal data via analytics, ads, other embedded contents are termed as non-necessary cookies. It is mandatory to procure user consent prior to running these cookies on your website.
SAVE & ACCEPT